Mark Surman on the NetGain Partnership

Mozilla Foundation's Mark Surman discusses the NetGain Partnership and its work to make the Internet open, secure, and accessible for all.

EDITOR’S NOTE: It’s difficult to understate the Internet’s potential as a resource for opportunity. Yet stable, secure, and unfettered access to the web remains sharply uneven across the globe, and rapid technological and social changes can pose as many challenges as opportunities. We exchanged emails with Mark Surman, Executive Director of the Mozilla Foundation, to learn more about the NetGain Partnership’s efforts to ensure that the Internet can be a safe and accessible resource for global opportunity and good.

DIGITAL IMPACT: What is the Netgain Partnership? Who is involved?

MARK SURMAN: The NetGain Partnership is a coalition of some of the world’s leading nonprofits: Ford Foundation, John D. and Catherine T. MacArthur Foundation, John S. and James L. Knight Foundation, Open Society Foundations, and Mozilla Foundation. We’re a diverse group of philanthropists with a shared vision: an open Internet that is built, used, and governed in ways that create opportunity for all. The Internet has created challenges and opportunities that touch many different parts of life—from education, to economics, to political engagement. The NetGain partners came together because we saw the Internet’s impacts on this wide variety of issues that we care about, and a corresponding need and opportunity for philanthropists to work together to help ensure the Internet is used for the common good.

DIGITAL IMPACT: Can you elaborate on the “Technology Principles” that guide the group’s work in the digital space? How were they developed and by whom?

MARK SURMAN: The technology principles that ground NetGain’s work were developed collaboratively by the NetGain partners. The issues we focus on as part of NetGain are varied—ranging from privacy and transparency, to free speech and equal access—but our work always draws on these core principles. In short, the NetGain principles are a commitment that we will aim to:

DIGITAL IMPACT: Founded in 2015, this is a relatively new partnership. Have you met any milestones that get you particularly jazzed?

MARK SURMAN: When we launched NetGain last year, one of our main goals was to help governments, social service providers, and advocacy groups be more effective in the digital age. During times of technological change—like the one we’re experiencing now—social challenges always arise. We must ensure that the Internet is inclusive, both in terms of who has access to it and who is represented there. For example, there is an opportunity to incorporate web literacy skills into education so that the “digital native” generations grow up knowing not only how to consume, but also how to participate and create online. We need actors working in the public interest to actively confront and address challenges and inequities like these. For this to happen, public servants, civic leaders, and advocates need support from colleagues who have a deep understanding of relevant technologies in order to identify and understand the social implications of the Internet and craft effective ways of mitigating negative impacts. But public interest organizations are facing a talent pipeline crisis: there are not enough technologists working or interested in joining public interest fields to meet growing demand.

Source: A Pivotal Moment: Developing a New Generation of Technologists for the Public Interest, Freedman Consulting, LLC for the NetGain Partnership

In our first year, NetGain focused on this gap and made major progress. NetGain partners made five grants to leading organizations that are working to tackle this talent gap. For example, we’re supporting New America Foundation’s TechCongress Congressional Innovation Fellowship, which aims to promote better technology policymaking by connecting technologists with members of Congress and Committees. In addition to the official NetGain grants, the partners also ramped up their individual investment in this work. Ford and Mozilla are just now concluding the inaugural year of our joint Open Web Fellows program, which placed six bright, passionate technologists at leading nonprofits like Amnesty International and the American Civil Liberties Union. Our Open Web Fellows accomplished big things, like advising governments, settling refugees, and building tools for journalists. 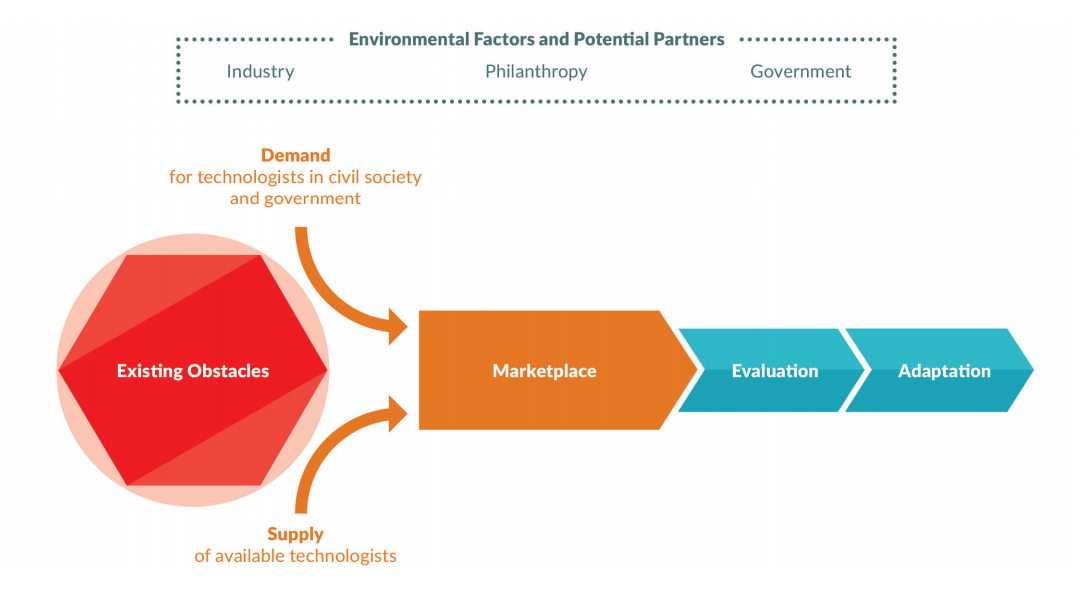 Source: A Pivotal Moment: Developing a New Generation of Technologists for the Public Interest, Freedman Consulting, LLC for the NetGain Partnership

DIGITAL IMPACT: What do you hope to see over the next 5 to 10 years?

MARK SURMAN: We need the Internet to be accessible, affordable, open, and safe for all who use it—including the billions of people who will come online in the next few years. In a sense, we need to see the Internet as a shared public resource. By public resource, we mean a shared resource that anyone can build from or add to, regardless of what they want to use it for. Like air or water, the Internet is something that we all draw on. Similarly, it is something that we all need to keep healthy. In the past two decades, the Internet has allowed us to unlock new economic opportunity and create new kinds of human connection. It has provided the building blocks to create everything from companies like Google and Facebook, to public institutions like Wikipedia, Mozilla, and the Internet Archive. The billions set to come online in the next few years deserve to have the opportunities and the skills to tap into the full range of potential offered by the open Internet. However, with growing concerns about everything from privacy to censorship to walled gardens, this is not guaranteed. In the coming years, we will need to actively make it so.

DIGITAL IMPACT: Are there target countries or populations?

MARK SURMAN: We believe the Internet is a global public resource, and thus our work extends around the globe. Both through grantmaking and other collaboration, we work alongside organizations with international scope.

DIGITAL IMPACT: What do you see as the biggest technological and data-related challenges faced by civil society today?

MARK SURMAN: In many parts of the world, surveillance is quickly becoming routine. Privacy oversteps by both governments and profit-minded corporations have eroded trust online, and also made the web a less secure platform. We’re seeing a rise in the power and number of walled gardens (closed systems, like the app economy) that stifle the web’s full potential. As these walled gardens proliferate, the Internet becomes less vibrant, less potent, and less exceptional. We’re also witnessing a dearth of technology-savvy individuals in the policy space. When legislation is crafted by those who don’t fully understand the promise and power of an open Internet, free expression and civic engagement come under threat.

DIGITAL IMPACT: What role does data, specifically open data, play in this partnership and its goals?

MARK SURMAN: Many of NetGain’s principles touch on data specifically. As the Internet enables the increased creation, collection, and analysis of data—so much of it sensitive—we believe it’s critical to treat that information with care and respect. Those who collect data should only gather what they need, and only use and share this information in a way that is transparent and benefits the user. Data should be used to advance the public good, and must be safeguarded from bad actors and intentions. We believe philanthropy has an opportunity to act as an exemplar here, leading in digital security and data ethics through its own practices.