The Data Behind Pro Bono Law

On Wednesday 28th The Thomson Reuters Foundation revealed their findings from the first ever survey to capture and analyse global pro bono trends across the legal industry. As you can imagine, the results reveal fascinating insights into the scale and potential growth of the sector, and are explored in this post.

According to their press release, “The Thomson Reuters Foundation Index collected data from over 100 firms, both large and small, representing 36,000 lawyers in 69 countries.” Some of the key findings: 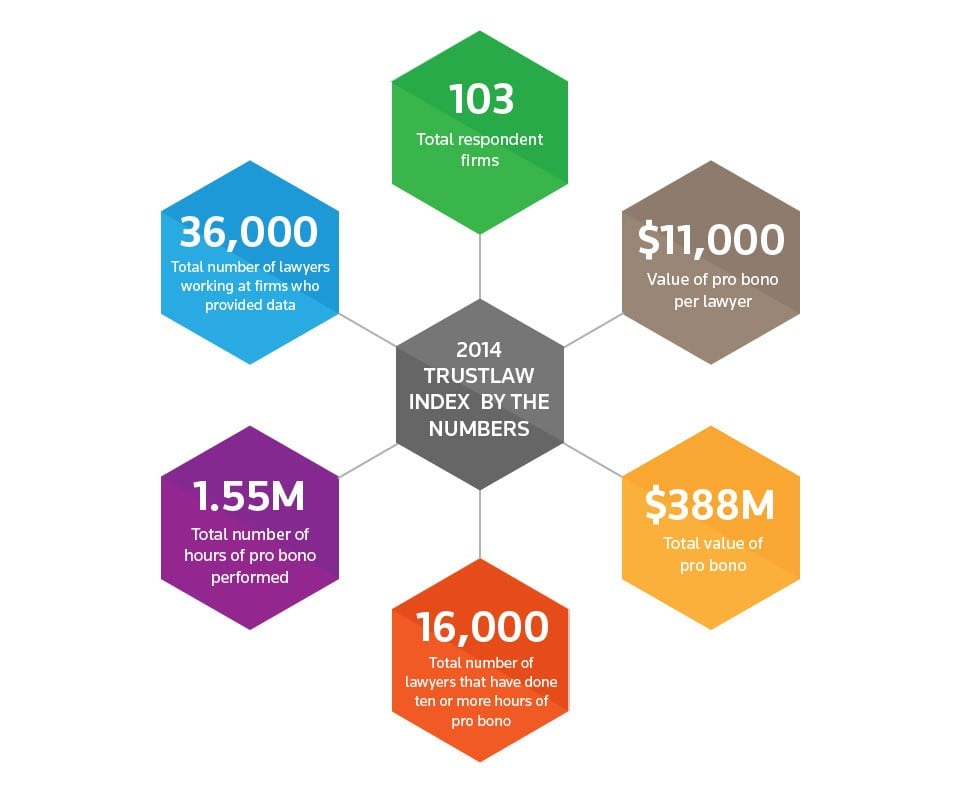 “The mission of TrustLaw is to spread the practice of pro bono worldwide,” said Monique Villa, CEO of the Thomson Reuters Foundation and Founder of TrustLaw. She goes on to declare that “every day we witness increasing demand for pro bono projects, and our network continues to expand to countries which traditionally haven’t encouraged the practice, from Saudi Arabia to Uruguay to mainland China.” Good news for the charities and social enterprises around the world that lack the resources, but urgently require legal advice to advance their programmes and the rights of the beneficiaries.

From our social sector perspective, its great to see the emphasis that the Thomson Reuters Foundation are putting on both data and transparency in the legal world of pro bono. Further examination of the data has led them to plenty of discoveries in how best to encourage more pro bono work, and also a means of tracking which firms do a particular good job at encouraging their lawyers to take this work on.

Many thanks to the Thomson Reuters Foundation for sharing this exciting news with us, be sure to follow them on Twitter, and loop in Markets For Good in any discussion you start.