Notes From The Field: CECP on Corporate Giving 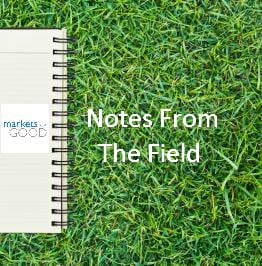 A brief note on the the state of corporate giving from Carmen Perez, Senior Research Analyst, Global Valuation, CECP.  Carmen’s discussion of trends and of CECP’s recently released measurement guide complements the wider movement in the social sector toward finding the building block critera that will allow for deeper comparisons of global entities working for social impact and discovery of critical data on who’s funding what? And where?

Despite the economic downturn that has plagued the United States for the last five years, corporate contributions have increased for the majority of companies; in fact, total giving increased for 59 percent of companies from 2007 to 2012. This finding was pulled from CECP’s Corporate Giving Standard (CGS) survey, which allows us to track annual corporate giving trends. The 2012 CGS survey, conducted in association with The Conference Board, gathered data from more than 240 of the world’s leading companies, representing US $20.36 billion in cash and product giving. CECP, where Fortune 500 CEOs turn to achieve societal progress and sustainable business performance, has been following corporate giving trends since 2006, both domestically and across borders.

Because analyzing and tracking global giving can be complex due to differing definitions of nonprofits and varying tax codes in each country, CECP released a global measurement guide in June 2012. The Global Guide to What Counts, created in collaboration with Deloitte, defines three new criteria to provide a consistent and concise definition of international giving recipients: the recipient must be formally organized; the recipient must exist for a charitable purpose; and the recipient must never distribute profits. Using the Global Guide criteria, a pilot Global Guide study was conducted among 31 companies to delve deeper into international giving trends than what is possible through the CGS. . The results showed that for the typical company, 44 percent of their total giving was designated to international recipients in 2011. Fifty five percent of survey respondents were headquartered in the US, 13 percent in France, 10 percent in Brazil, and 10 percent in the United Kingdom.

CECP’s works with its member companies through benchmarking and data analysis to better understand their own global giving, as well as those of their corporate peers. From a global perspective, benchmarking provides context for global giving when discussing matters with internal and external stakeholders; identifies companies working on similar issues areas or within the same country; and ensures alignment of strategic corporate goals and priorities with philanthropic activities. Effective measurement and alignment creates sustainable and effective programs that are good for companies and the communities they seek to assist.

Continue to check back on CECP’s website, as it continues to develop its global giving guides and report the results of its data.