92Y's Asha Curran on the movement's origins and ambitions: "How best to gestate a movement like this and take it to scale, creatively and responsibly?"

There are fundamental shifts happening in the nonprofit (or “for-purpose”) sector. Online donations are on the rise, and social media is creating an active and engaged community of givers. From the Ice Bucket Challenge to the #nomakeupselfie, people everywhere are finding new ways to become philanthropists and volunteers, and to talk about what causes they care about most passionately. As giving becomes an ever more prominent feature of the public domain, we share with Markets For Good the belief that it is our collective responsibility to ensure that this giving is as effective and as great as possible.

#GivingTuesday, an annual day of giving following Black Friday and Cyber Monday, relies on this type of ownership to empower a new community of philanthropists. The movement was based on the concept that anyone, anywhere, can be a philanthropist; you don’t have to be a billionaire to participate, and you don’t have to give funds. Giving can mean money, time, advocacy, or education.

In many ways, #GivingTuesday was – and still is – an experiment. The idea was incubated at the 92nd Street Y, but our goal was to decentralize the movement as much as possible. Though we are polymaths at 92Y, we recognized that starting social movements was not one among our many competencies, so our first move was to ask some of the brightest and most innovative minds in multiple sectors for their counsel and support. How best to gestate a movement like this and take it to scale, creatively and responsibly?

Matthew Bishop and Michael Green, co-authors of Philanthrocapitalism: How the Rich Can Save the World, postulate that the way to solve big problems is not through the typical approach of one organization, one problem, but rather through creating a “posse,” which works together to address a shared challenge. We took a posse approach to the creation of #GivingTuesday.

The #GivingTuesday posse united leaders from the tech, fundraising, and marketing sectors, who each added a specific block to the #GivingTuesday foundation and became our biggest ambassadors. Early #GivingTuesday efforts were shaped by advice and support from partners at Stanford PACS, Guidestar, CECP, Facebook, Edelman, and others. The stellar team at the UN Foundation came on as founding partners to lead communications and have since gathered a corps of top firms to work together and contribute pro bono work to the movement. By simply asking for help and by giving a group of enthusiastic, entrepreneurial people real responsibility and real work to do, we got real results.

As we prepared for year 2 in 2013, we learned the power of maintaining an open and creative environment. We remained cause/platform/charity agnostic and instead asked anyone, anywhere to participate in whatever form was most meaningful to them. This openness, I believe, caught the attention of our global partners, who approached us early on to learn how they could bring the movement to their countries. From Australia to Latin America to Singapore, countries took the idea of #GivingTuesday, translated our resources, and localized the call to action to create a national day of giving (we ultimately saw campaigns in over 46 countries, from Canada to Zimbabwe).

It was inspiring to see that the concept translated to regions where Black Friday and Cyber Monday were not necessarily relevant—proof that the spirit of giving resonates in every community, all around the world.

We now count over 13,000 partners globally. 2 billion people activated on Twitter last #GivingTuesday, and online giving has increased by 270% since #GT’s inception in 2011. These numbers are encouraging, but they also show that we – the #GivingTuesday community – can do more. There is more giving to be done, more learning to be done, more volunteer hours and skills to donate.

As we count down to December 2nd, we expect to see a surge in creativity and an ever-wider sense of ownership of the movement. We will see greater international participation and new hashtags, #UNselfies, and branded civic movements inspired by the #GivingTuesday model. This year is also about great giving. We are working with key partners in the US and abroad, including the Case Foundation, Network for Good, DonorPerfect, GlobalGiving, PayPal, Microsoft and many more, who are able to provide key data and insights to help donors think in more data-driven and more intentional ways about the causes they care about and the organizations they benefit.

We look forward to seeing more connections between the innovative thinking and entrepreneurial energy that exists in the nonprofit sector, and the great capacity to help one another that is the connective tissue of humanity. 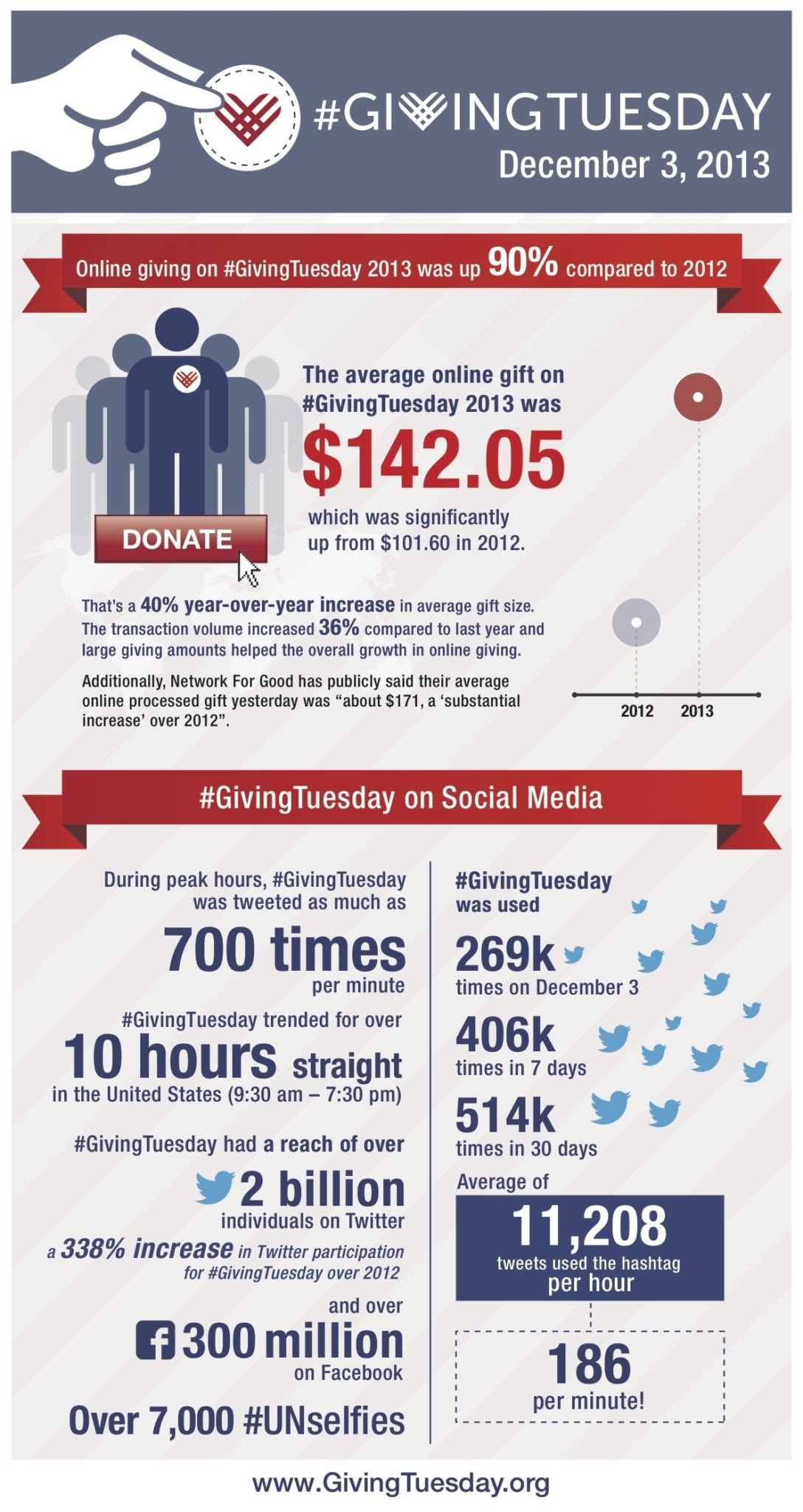