Credit Data courtesy Marc Imhoff of NASA GSFC and Christopher Elvidge of NOAA NGDC. Image by Craig Mayhew and Robert Simmon, NASA GSFC. This image of Earth’s city lights was created with data from the Defense Meteorological Satellite Program (DMSP) Operational Linescan System (OLS). Originally designed to view clouds by moonlight, the OLS is also used to map the locations of permanent lights on the Earth’s surface. The brightest areas of the Earth are the most urbanized, but not necessarily the most populated. (Compare western Europe with China and India.) Cities tend to grow along coastlines and transportation networks. Even without the underlying map, the outlines of many continents would still be visible. The United States interstate highway system appears as a lattice connecting the brighter dots of city centers. In Russia, the Trans-Siberian railroad is a thin line stretching from Moscow through the center of Asia to Vladivostok. The Nile River, from the Aswan Dam to the Mediterranean Sea, is another bright thread through an otherwise dark region. Even more than 100 years after the invention of the electric light, some regions remain thinly populated and unlit. Antarctica is entirely dark. The interior jungles of Africa and South America are mostly dark, but lights are beginning to appear there. Deserts in Africa, Arabia, Australia, Mongolia, and the United States are poorly lit as well (except along the coast), along with the boreal forests of Canada and Russia, and the great mountains of the Himalaya.

In our latest From the Field, Frontline SMS CEO Sean McDonald talks about their new environmental sensor, designed to bridge the environmental data divide with open hardware.

A little over a year ago, we set out to do something ambitious. We set out to build environmental sensors that would bridge an under-recognized digital divide: the environmental data divide. Most sensors require Internet signal to report data, as well as fixed power infrastructure. Much of the world doesn’t have either, meaning that we have surprisingly little ground level data about what happens in rural or offline areas. The more we rely on data to understand the effects of our actions, the more important it is for us to be able to represent the environment using feedback data.

Sensors can provide data about the environment, representing the Earth in the same way that user-tracking data represents people. As the saying (and academic research) goes, you become what you measure – so it’s all the more important to make sure that we have the data we need to understand the world around us. The more our understanding is informed by algorithms, the more fundamental the collection of environmental data becomes to ensuring the representation of sustainability to our vision of a better future.

But, like any technology, environmental sensor distribution is limited by access to very practical things, like electrical infrastructure and data signal. Sensors that run out of battery quickly or aren’t reliable data feeds aren’t much use. Similarly, data, provided without context, and for its own sake doesn’t add much value, either – so the context is important. In order to begin to address this, we started looking for open blueprint hardware solutions, alternative sources of energy, and ways to transfer structured data that reach further than the Internet.

“You become what you measure – so it’s all the more important to make sure that we have the data we need to understand the world around us.”

With challenges this large, we reached out to a coalition of some of the organizations we respect most and started building a team. Feedback Labs was a natural partner – we are, by design, a place to test audacious ideas that build meaningful engagement in some of the most important corners of the world. From there, the FrontlineSMS team contacted subject-matter experts – starting with the Earth Journalism Network (EJN) for sensor expertise, Development Seed for data pipelines and visualization, Internews for deployment capacity, and the Groundtruth Initiative for a deep understanding of how to engage communities. Each organization has expertise in an important part of the feedback cycle and design process.

With the team assembled, we got to work. First, we decided to attach solar paneling to the sensors in order to minimize energy maintenance requirements. Next, we decided that in addition to building WiFi sensors, we’d also build sensors that were able to use Short Message Service (SMS, or text messaging) as a data channel. SMS travels using the mobile spectrum, which covers significantly more territory than Internet signal. By communicating data via SMS, we could reach beyond the limits of the Internet. These small technological tweaks, on top of established, open platform hardware became the foundational hypotheses of our project. Now, to test that hypothesis.

Willie Shubert of Internews and the Earth Journalism Network is our in-house sensor expert – he’s been working with the Public Lab at Harvard to identify and develop a modified blueprint for DustDuino sensors. DustDuinos are built on Arduino, the open hardware platform, and are specifically designed to identify particulate matter in the air – particulate matter is a particularly valuable indicator, demonstrating everything from proximate fires to carcinogen health risks. Willie identified a sensor specification and worked with a group called Seeed Studio– a hardware manufacturer in Shenzhen to build our sensors.

“When the environment can text us how it’s doing, we know 160 characters are just the beginning of what’s possible.”

While Willie got to work on the hardware, the Frontline and DevelopmentSeed teams started building the data pipeline. Recognizing that SMS costs money, we agreed to program the sensors to communicate every 12 hours, sending a structured message that represented four value measurements per hour. That text message would hit FrontlineCloud, our web-based tool, and it would parse the sensor identifier, recognize the measurements, and assign a structure to the data. From there, Frontline hands the data to a visualization platform built by DevelopmentSeed, which shows the location, trends over time, and absolute values per sensor.

At the same time, InfoAmazonia – an EJN partner – ad Groundtruth Initiative got to work putting together a context for deploying the technology. Initially, we thought we might deploy in rural Brazil, in the hopes of tracking the particulate matter that comes from rainforest fires, or the air quality of more populous areas. And while that’s something that we’d still like to track, they came up with a much smarter plan for a pilot – we’d work in urban areas and track the effect of traffic on air quality. To start, they picked bus stations in São Paolo as the first context. 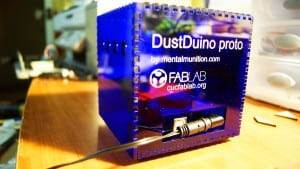 Our first experiment will look at a couple of things – we’ll figure out whether the bus schedule has an effect on air quality throughout the course of day. We’ll also deploy sensors to measure whether air quality in urban transportation centers is measurably different than in other high traffic parts of the city, as well as less trafficked parts of the city. With air quality data, causation is tough – but the closer you can get, the more valuable the insight. Our pilot is aimed at getting as close to causation as we can, building both insight and community around the sensing process and the data collected.

At this point, the technology infrastructure is there, our sensors have just reached Brazil, and our implementation is ready to go. That said, we know we’re just beginning to scrape the surface of what’s possible. In the next iterations of this, we want to build communities around doing remote sensing, driving local ownership of both the data and the voice that data supports. Similarly, we’d like to be able to measure more things and set up community-owned early warning systems – using mobile alerts about environmental conditions to activate local resilience planning. This pilot lays the infrastructure for a new way of building a feedback loop that helps us understand the world around us. When the environment can text us how it’s doing, we know 160 characters are just the beginning of what’s possible.

Many thanks to Sean McDonald for sharing this article about the exciting environmental sensor technology Frontline SMS have developed with Feedback Labs. To find out more about their great work, be sure to follow them on Twitter @FrontlineSMS  – you can follow Sean at @McDapper.