In our latest community insights post, we talk to Richard Turner, Chief Fundraiser at SolarAid about the biggest opportunities in digital fundraising at the moment.

In our latest post for our Community Insights series, we talk to Richard Turner, Chief Fundraiser at SolarAid about his career as a fundraiser and the biggest opportunities in digital fundraising. 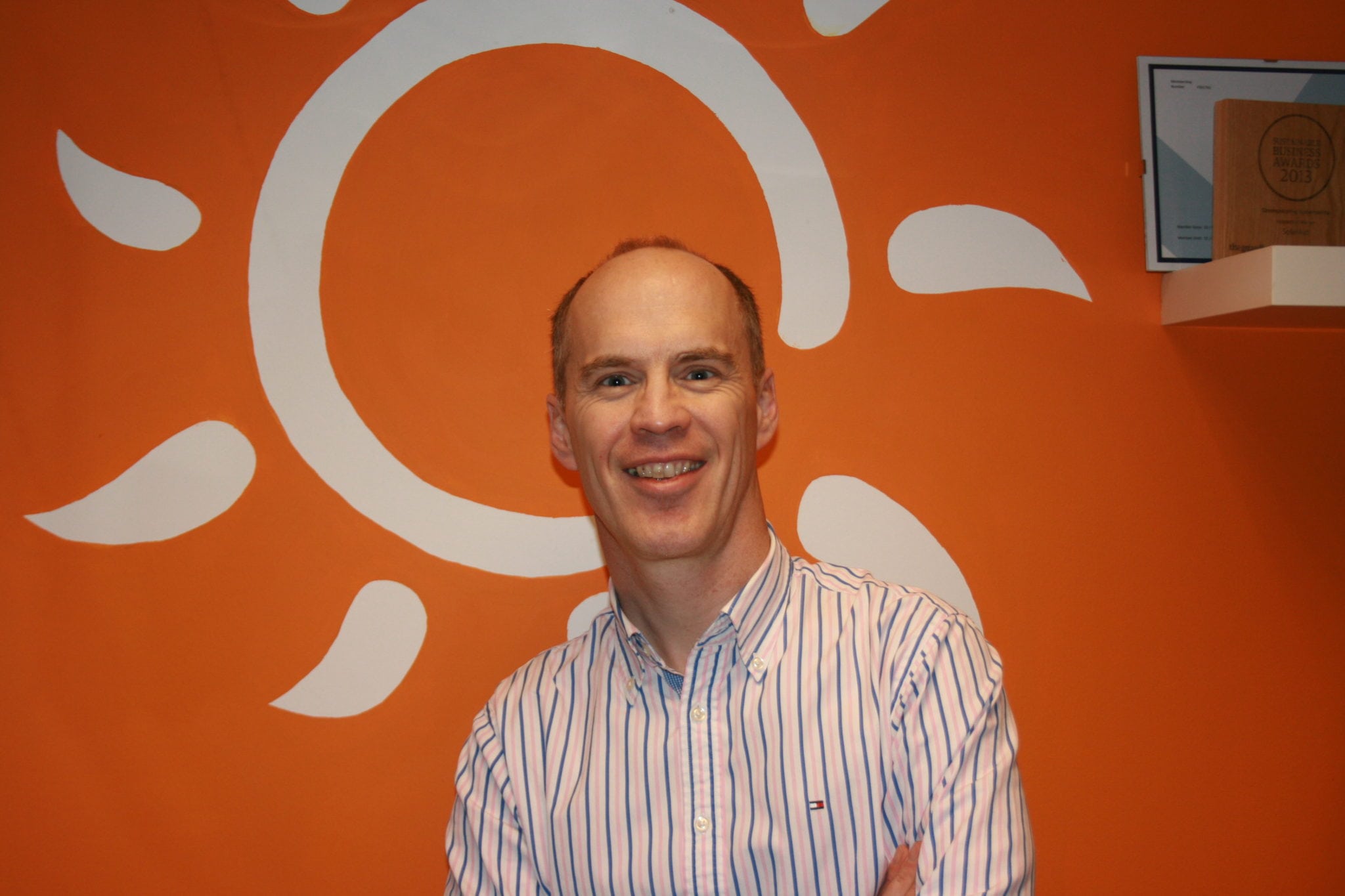 Tell us a bit about yourself and your career so far.

I’ve been a fundraiser for 25 years, this year! Not something that you set out to do, but I got involved with it whilst at University, with the college RAG [University Rag societies are student-run charitable fundraising organisations that are widespread in the United Kingdom and Ireland], which is very distinct in the UK, and that led to my first job with Oxfam as an events fundraiser. I ended up staying there for eight years, and I really got my interest and passion in international development in particular. I think it really helps – you don’t to be totally committed as a professional fundraiser, but it does help you get out of bed when you really believe in the cause or issue that you work for.

Most recently I’ve been at SolarAid for four and a half years now, which is quite a small enterprise that’s approaching the issue of poverty and climate change in a very different way for a social enterprise – it’s been really exciting to be part of that.

What are you working on right now that might be of interest to the Markets for Good community?

Where to start! There’s a lot of talk in fundraising about how we engage the public and certainly attract new supporters, so we’re excited a new project called the Speed of Light, which there’s been a blog post about on Markets for Good. It looks to leverage people’s social capital, and how we’re all connected. If we can inspire you about the work of SolarAid, then maybe you can go on to inspire your network of contacts, friends, colleagues, and so forth. That’s something we’re learning from all the time – anything new like that, it’s always full of surprises – it never turns out as you might expect. Most recently, we’ve attracted a corporate partner who uses the Speed of Light platform to show customers the impact of their work, and how many solar lights they’ve helped fund for us.

That fits in with something much bigger, which a campaign that SolarAid has set out, with the rather audacious goal of eradicating the kerosene lamp from Africa. We had no idea how we were going to go about it – four years on, and nearly two million lights sold and distributed later, we’ve learned so much. We’ve been very successful in one market in particular – Tanzania – where the solar lights have really taken off so fast that it’s really surprised us.

“Failure and success almost go hand in hand. It’s failure that helps you springboard, and gives you great insight along the way – it’s something you need to embrace, and get used to.”

It’s almost taken us unawares, to realize we’re not needed, in Tanzania, to do what we need to do. I suppose it’s quite refreshing, for a charity to say ‘We’re no longer needed here – we need to move on’, but its hard when you’ve got a program, and staff involved. Right now we’re really involved in rethinking, and regrouping, thinking about our strategy going forwards.

We’ve had some great success – the kerosene lamp, in parts of Tanzania, is a thing of the past, I’ve heard someone say. It hasn’t happened quite the way we wanted it, but that’s what happens when you’re pushing the boundaries. Failure and success almost go hand in hand. It’s failure that helps you springboard, and gives you great insight along the way – it’s something you need to embrace, and get used to.

Your team has been working on some great fundraising initiatives, like the Impact Calculator and the Speed of Light. What do you think are some of the biggest opportunities in digital fundraising at the moment?

The great thing about digital is how we’re all connected. The danger is, because it’s got the ‘fundraising’ label, people think its about measureable response, and so forth, and yet I think marketing has profoundly changed in the last five years or more, about how we approach these decisions. I don’t think the voluntary sector has caught up – I think it’s stuck in the old ways of direct response, which highly measureable, because it gives some degree of comfort – even when we see response rates really plummeting, charities keep sticking to this method, because they can measure it.

“I don’t think the voluntary sector has caught up – I think it’s stuck in the old ways of direct response, which highly measureable, because it gives some degree of comfort – even when we see response rates really plummeting, charities keep sticking to this method, because they can measure it.”

Digital offers a way to really engage an audience, who go on to engage another audience, through their channels – it’s less easy to directly measure, although in many respects there is so much to measure. I think that’s where the real excitement is. How can you inspire me with your cause and its story, to the point where I will engage with your network: either with a post on Facebook, or a blog I might have, or something I might put on YouTube. That’s where the real magic happens.

You only have to look at something like the Ice Bucket Challenge, and how that went viral – I think that it went so well because ‘the ask’ came from someone I knew, someone I trusted – it didn’t come from the cause.

I think its opportunities and stories that can really spread, that will really benefit traditional fundraising – which is great, because we have some of the best stories to tell. We need to focus more on storytelling, and inspiring people, rather than trying to squeeze another donation out of someone. That method is really getting a kickback, especially in the UK, from the public. It’s reached a point where the press have leapt on a way that may be unfair, but it’s a reflection on the way that marketing and fundraising needs to really change.

“I think its opportunities and stories that can really spread, that will really benefit traditional fundraising – which is great, because we have some of the best stories to tell.”

What has been your most valuable failure?

When I was visiting Tanzania, we tried out our school campaigns, engaging schools about solar lights. We were so convinced it was going to work – because it worked on an island, off of the coast in Tanzania – and I went to watch the all teams promoting and selling solar lights. At the end of it, it was just disastrous – it went very badly. I remember sitting in the grounds, thinking crikey, this is a real failure. We were asked to go away, and think about what we were going to do next. We went for a walk, and someone said ‘What if we brought all the schools together in one place, instead of going to each individual school?’

That was a real breakthrough that lead to a huge takeup. It was more time-efficient, and the person carrying the message now was the most trusted person in the community – the headteacher, who was going back to the school to tell them. If we hadn’t had that failure, I wonder if we would’ve had that next insight about spreading it all around. It probably comes from having an audacious goal, as well. It was great to witness that moment, and see something born out of it that was extremely successful afterwards.

What three lessons would you pass on to nonprofits and charities that are beginning to think about fundraising online?

Lesson one is: the world of marketing has changed. The internet has profoundly influenced how we behave when buying. Understand, and find out about the root causes – read the books, – if you understand, then solutions to the problems, and opportunities for fundraising, start to drop out really easily.

“The second is that everyone has social capital, as do organisations.”

The second is that everyone has social capital, as do organisations. If you can align yourself with organisations that share your causes’ values and beliefs, then chances are their customers and consumers will share those beliefs too – and they can amplify the message to their audience. That’s  something you can do to really punch above your weight. You don’t need to have a huge donor base anymore, through the means of digital we are all connected. We are all now a channel. Leverage people’s social capital.

So understand the root cause, amplify through partners, and really sell that story so it spreads – that would be my three.

Many thanks to Richard Turner for taking part in our Community Insights series. You can stay up to date with what he’s up to by following him on Twitter at @iFundraiser.

To stay up to date with the latest Markets For Good articles and news, sign up to our newsletter here.