A Trip To The Woodshed (Or, “The Nitty Gritty of Data Visualization”) 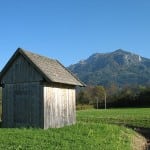 There are no pictures or visualizations here. Well, just the one here to the left – of a woodshed. I use it not per the Wikipedia definition, but rather per that of Wynton Marsalis. “By the time I was sixteen, I understood what the (wood)shed was about – hard, concentrated work.” Data visualization isn’t new, but today’s iteration of it definitely is a leap to a new plane. We should relieve ourselves of the pressure to execute all of the latest and greatest and, instead, take back the driver’s seat to test this and any new tool (especially the digital ones) for best application to the mission at hand.  Iterating and learning are the top priorities. Those are synonyms for “hard, concentrated work.” Jason Hahn of Grameen Foundation provides a case in point for diligent, first-hand learning …”‘shedding.” All best :: Eric

Can data visualization make a difference? Can it improve your programs? In the case of Grameen Foundation, can it make fighting poverty easier? It certainly can. We have seen examples of the impact of visualizations with Hans Rosling’s compelling (and beautiful) work. And, 160 years ago, John Snow demonstrated similar insight when he visualized cholera outbreaks.

Data visualization is important because of the way the human brain is wired. Researchers at the University of Pennsylvania School of Medicine estimate that the human retina can transmit visual input at about the same rate as an Ethernet connection. Further, we know that we remember certain kinds of data better if processed by our brains as pictures rather than as word forms.

At Grameen Foundation we are focused on eliminating poverty. We provide access to essential financial services and information on agriculture and health, assistance that can have wide-scale impact by addressing the specific needs of poor households and communities. We also develop tools to improve the effectiveness of poverty-focused organizations.

We’ve been collaborating with colleagues from Microsoft to use data visualization to better understand our work and improve our programs. We plan on using the results of this collaboration to improve the quality of our programs which empower the poor people we serve to reach their full potential.

Here is some of what we’ve learned along the route:

Together with Microsoft we have taken the first steps in bringing data visualization to Grameen Foundation.  We’ve learned the utility of a great visualization program like Microsoft Excel, the need to really drill down and “know” your data before you start analyzing it, and the value that comes from making data easily accessible and understandable.  As we ramp this particular data skill we improve Grameen Foundation’s potential to better its use of data to serve the poor and poorest.