The DATA Act: A Look Ahead

Whether they are providing disaster relief, pre-school education, or assistance to people with disabilities, nonprofits often partner with government – through grants, contracts and other payments – to address social concerns. Considering the close working relationship between government and nonprofits, it is surprising how little is known about the details of this partnership.

This is where the Digital Accountability and Transparency Act (DATA Act) comes in. Signed into law by President Obama in 2014 with a significant push from the Data Coalition, the legislation aims to improve the accessibility and transparency of federal spending information through the website, www.USAspending.gov.

If implemented in a way that accurately identified federal awards to the nonprofit sector, the DATA Act could be enormously helpful to nonprofits. The information could be used for fiscal planning, accountability, maximizing the impact of federal grantmaking, improving philanthropic decision-making and even catalyzing private sector activity.

Shortly after the Act’s passage, the Nonprofit Data Project of the Aspen Institute’s Program on Philanthropy and Social Innovation reached out to the U.S. Treasury Department and the Office of Management and Budget, the agencies responsible for implementation.

The Nonprofit Data Project – which bring together the major nonprofit research and data providers in the United States, including Foundation Center, GuideStar, Center for Civil Society Studies at Johns Hopkins University, the Center on Nonprofits and Philanthropy at the Urban Institute, and the Lilly Family School of Philanthropy at Indiana University- was mindful of a 2009 Government Accountability Office report which noted that www.USAspending.gov had failed to provide an accurate picture of federal funding to the nonprofit sector. We hoped that the DATA Act could rectify these problems.

The Project offered recommendations that would:

There’s another aspect of the DATA Act that nonprofits should know about: under Section 5 of the Act, the government is launching a pilot program to simplify the federal reporting process.

The Department of Health and Human Services (HHS), which is leading the grants portion of the pilot, says it will “build recommendations for reducing redundancies, burden, and cost for recipients of Federal Financial Assistance (grant) awards.”
HHS is in the process of conducting surveys to gather input for a report to Congress. If your organization gets federal funding and would like to provide input on appropriate reporting requirements, email DATAActPMO@hhs.gov and ask to be part of the HHS survey.

The Aspen Institute has put together a chart to help organizations navigate the potential uses of nonprofit federal spending data: 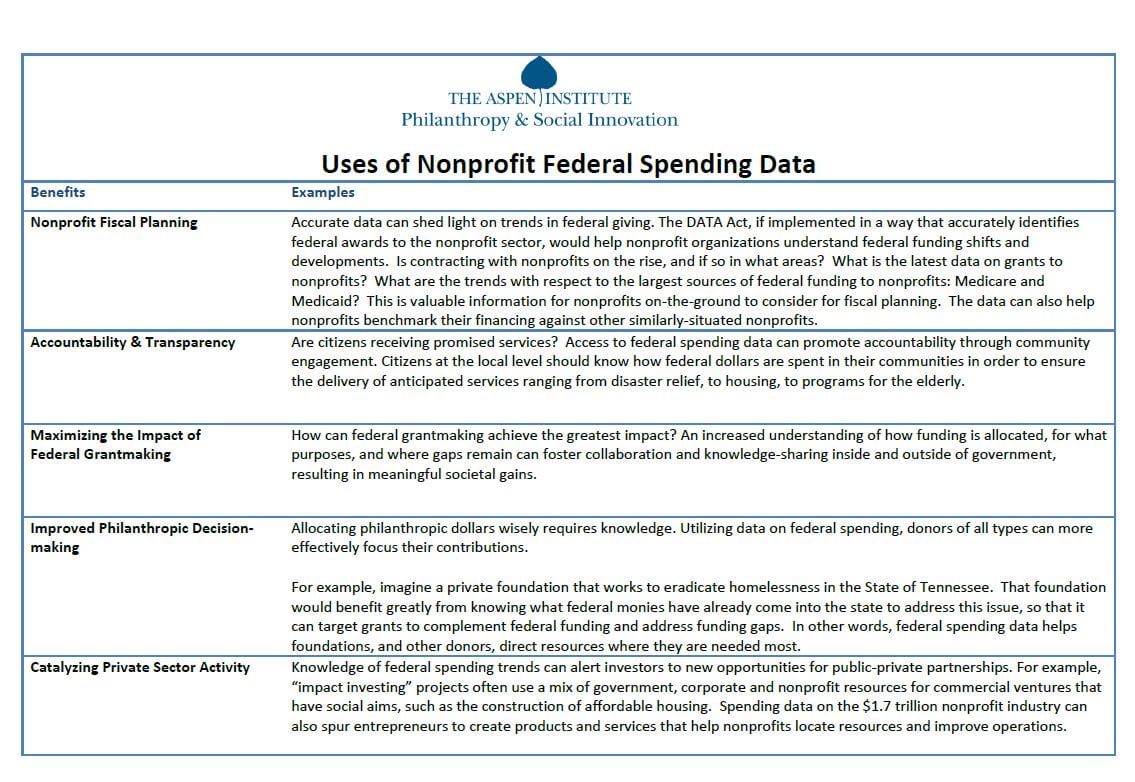