Beth Kanter closes our year with the CEO of the ALS Association, taking a look back at the year's most memorable fundraising campaign - the ALS Ice Bucket Challenge.

Last month, I had the pleasure of attending the Social Innovation Summit, a twice-annual event that represents a global convening of thought leaders in technology, investment, philanthropy, international development, and business. I’ve been going every year since 2009 to cover the event on my blog. Out of all the amazing speakers and discussions, I was lucky enough to sit down with Barb Newhouse, President & Chief Executive Officer ALS Association and discuss the Ice Bucket Challenge. 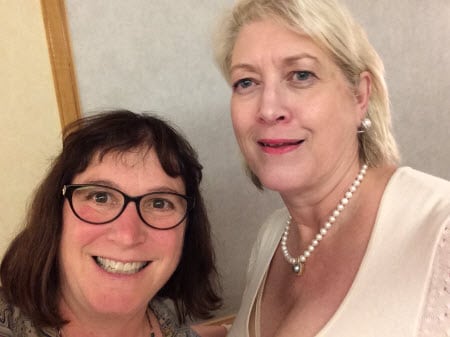 Barb Newhouse was appointed to her job at the ALS Association chief executive in May 2014 and was still new when the Ice Bucket Challenge took the nation and the ALS Association by storm this summer. She recalls, “I was visiting a chapter in Alabama when I got a call from the fundraising team letting me know about the Ice Bucket Challenge that at the time was happening in Massachusetts at a fundraising event organized by Peter Frates and that people were posting videos on Facebook.” Barb says she thought it was great that they might raise some money and some visibility on Facebook, but never in a million years did they anticipate that the fundraiser would transform into a global event.

Barb recalls “all of sudden it went crazy! And, our entire organization kicked into high gear.” They set up daily messages on their web site and social media channels to let everyone what was going on. They also sent out information to and got feedback from chapters, board, and relevant stakeholders. ”We were deluged with media interviews. There was one day in August where I did 30 interviews.”

Of those who donated, 600,000 donors checked the box or gave permission for the ALS Association to contact them in the future. The organization has pulled together a brain trust of advisers – Blackbaud, Porter Novelli (PR), Charity Dynamics, and other consultants and experts to help formulate and deploy an engagement and retention strategy. This is because Newhouse holds the belief these donors are younger and want to engage differently with the ALS Association.

According to Newhouse, in the past, the organization viewed social media as a necessary evil. She says, “it was like – oh yeah, we have to do that.” It has now become more central to their communications and fundraising strategy, especially for retention of these new donors who Newhouse says want a lot more accountability. They are redesigning the web site and other communications to keep donors informed about how the money is being spent and their continuing efforts to support research, patients, and the ALS ecosystem. Newhouse believes “$115m a lot of money, not enough to cure disease, but it is a game changer.”

The ALS Association is working hard on the programs they have invested in and at the same time building our engagement of these new donors to keep them donors. “The worst thing that can happen that in 3-5 years – we can’t sustain the research” says Newhouse. “We are committed to increasing our fundraising capacity around engagement and retention so we can continue this important work.”

The Ice Bucket Challenge has made the ALS association examine how it collaborates with the players in its ecosystem. Newhouses firmly believes “we need to learn from each other and collaborate more.”  The ALS ecosystem has many players with different niches – patient support, caretaker support, research, etc.   “Prior to the Ice Bucket Challenge, we thought more about our differences and now we need to think about how we can leverage each other strengths. You can’t do good research if don’t understand the patient, you can’t do good advocacy if you don’t understand the research and you can’t do good patient care if you don’t support research and advocacy. We need to more work better as an ecosystem.”

According to Newhouse, the Ice Bucket Challenge raised over $115 million from 2.6 million donors. The Ice Bucket Challenge lowered the average age of their donors from age 50 to age 34. The organization acquired a lot of new “Gen Z” or “PhilanthroKid” donors. Recently, Newhouse was in meeting when a staff member because a ten year old was in the office and wanted to meet with her. The young philanthropist handed her $100 for ALS that he has raised. He told her, “and there is more to come!”

Indeed, for ALS Association and other nonprofits that successfully use social media to engage and retain younger donors, the benefits are there to be reaped.

As it’s nearly the holiday season, let me leave you with few resources on donor engagement, stewardship, and retention.

An Attitude of Gratitude

What is your organization’s strategy for donor retention for new donors that you may acquire via social media or giving days? What are you takeaways?

Many thanks to Beth Kanter for a great look back at the ALS Ice Bucket Challenge and some terrific nuggets of inside information from Barb Newhouse.