It’s not every day an author gets a chance to really see what readers think of her work. Sure, blogs have comment sections (ouch!) and social media gives everyone a chance to chime in, but neither have proved to be all that effective at generating real dialogue between author and readers.

Given this, I was delighted to sit down for coffee with Kaliya Young and watch as she pulled out a hard copy of Philanthropy and Digital Civil Society: Blueprint 2018, opened it flat on the table, and exposed her highlights, underlines, and question marks. 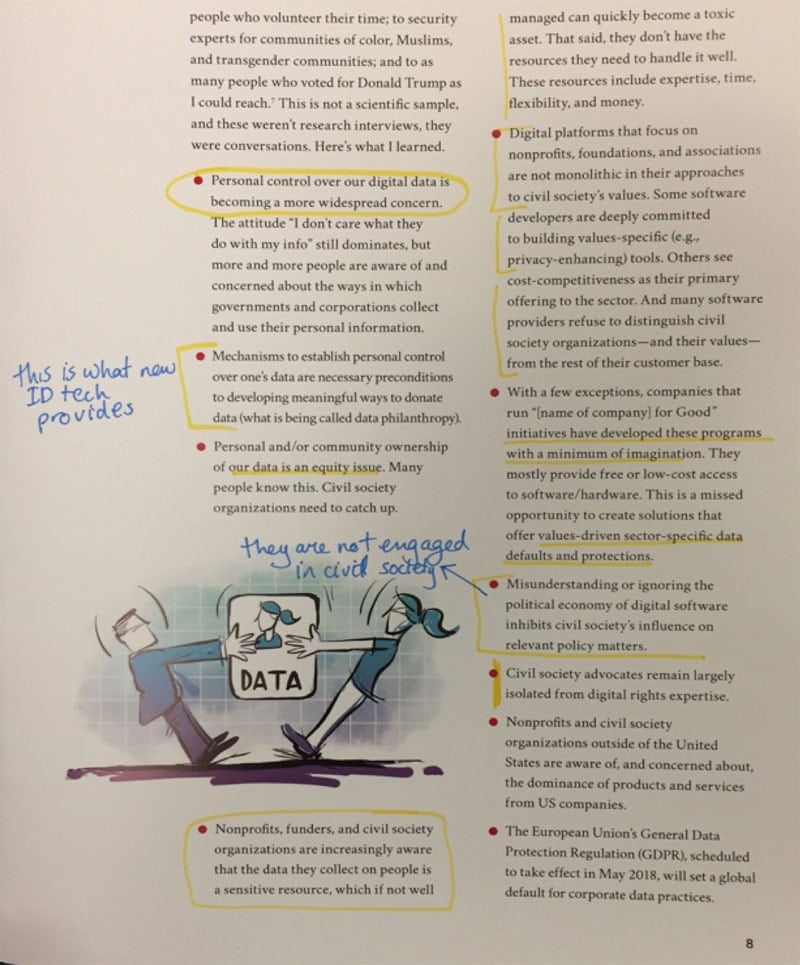 In nine years of writing the Blueprint, I’ve had lots of conversations with people about their ideas, but I’d never seen someone else’s “notes.”

Kaliya got involved in the digital identity movement in the early 2000s. The 2003 paper, Augmented Social Network: Building Identity and Trust into the next Generation Internet, sets out several of the key ideas. People need to be able to own, control, and manage their identity on the internet. Only then will we be able to make sure the internet continues to work for people, and not solely for corporations. Democracy, the authors argued, depends on people trusting the system and controlling their identity and data. Looking back on this paper from the Facebook-dominated data-breach-as-norm world of 2018, the awareness and prescience of the authors is striking. More of us now understand — or are at least aware of — the dynamics between data, democracy, and the perverse incentives that dominate today’s digital world. So maybe what’s now called the “self-sovereign identity” movement will gain steam.

Even as they understood the challenge, the environment needed to change in order to make personal control of one’s digital identity possible. First, we all needed to become cyborgs. Back in the old days when we sat down, logged in, and then used the internet it wasn’t possible to deploy an “always on” identity control system. Now that so many of us are always connected via cell phones, the ideas from 2003 become more possible. Same is true with the advent of security and privacy-first systems, of which blockchain is the most hyped, and there are others in development. Kaliya’s notes show a personal ID layer of the internet fitting into the core infrastructure level: 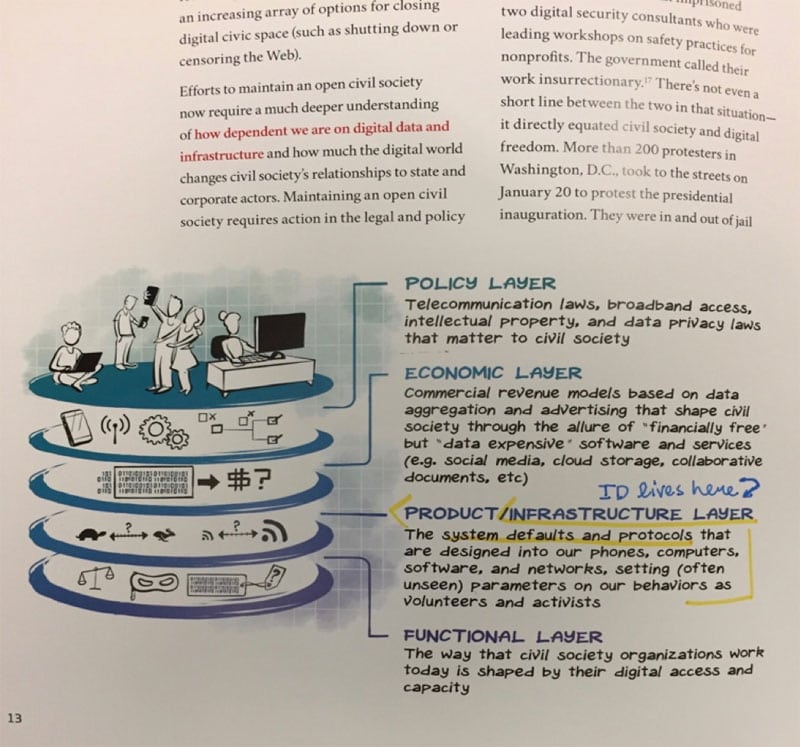 If this is right, it has important implications for both the functional layer (how associations work, how nonprofits treat data) and the policy level.

When we shift our frame from thinking of civil society and digital innovation/rights/policy as two separate things and begin to see them as one — digital civil society — we see numerous opportunities.

Maybe we could participate in building the infrastructure to replace facebook? Not with one “platform” but with open standards that empower people and allow them to connect with the organizations they choose without a company dis-intermediating them from their own followers.

Going behind this “new, better, different” Facebook in conversation with Kaliya, she challenged me to think creatively beyond that. Facebook has so significantly shaped our worldview that we can hardly think beyond “one big platform for everyone.”

Planetwork, a San Francisco-based network using information technology to address climate change and other pressing issues, fist convened in 1999 to ask environmental groups how they would organize themselves better to work together. There were two options: Stay separate and isolated on their own website; or join “one big platform.” But no one would give up control of connecting to their members in that way. Well, we did.

Planetwork saw a middle path with what at the time was called user-centric identity, where individuals could be the center of connecting to multiple groups from a point of identity they controlled. A bipartite network that had both people and organizations. Each with their own tools and open standards to connect it all together, so that people connected directly to organizations and the network around them, rather than through a for-profit platform that “owned” all the identities on it and controlled who saw what using algorithms.

We need more diverse and inclusive engagement in new technologies and new policy frameworks. What if the people involved in building blockchains or developing AI or setting standards for the internet of things were as diverse and worldwide as the people whose lives are affected by these things?

This is all possible. This is the work of digital civil society.

Thanks to Kaliya Young and the sovereign ID movement for their work and bringing these ideas to my attention. Check out this NY Times article on the most recent IIW conference and an article by Kaliya on sovereign ID.