The Center for Effective Philanthropy provides a data-driven analysis of what transparency means to foundations and grantees – in concept and practice.

Transparency – it’s a hot button issue in the ongoing discussion of data use in the social good sector, among other fields. But what exactly does it mean to foundations and grantees, and how is it tied to effectiveness in philanthropy?

The Center for Effective Philanthropy (CEP) explored these and other questions in a recently published study, Sharing What Matters: Foundation Transparency.

The report draws on surveys of 145 independent and community foundation CEOs and 15,000 grantees, as well as a review of 73 foundation websites. The resulting analysis provides an insightful look into how transparency is conceived and practiced among major foundations and their grantees.

Notably, the study found that while foundations generally value transparency, particularly in collaborating with their nonprofit grantees, they tend to prioritize transparency in terms of clearly communicating program processes and objectives rather than sharing details about outcomes and overall impact.

Not surprisingly, foundation CEOs and their nonprofit grantees identified transparency as a fundamental factor in building effective partnerships. Grantees, in particular, closely associated a foundation’s perceived level of transparency with their perceived strength of relationship. 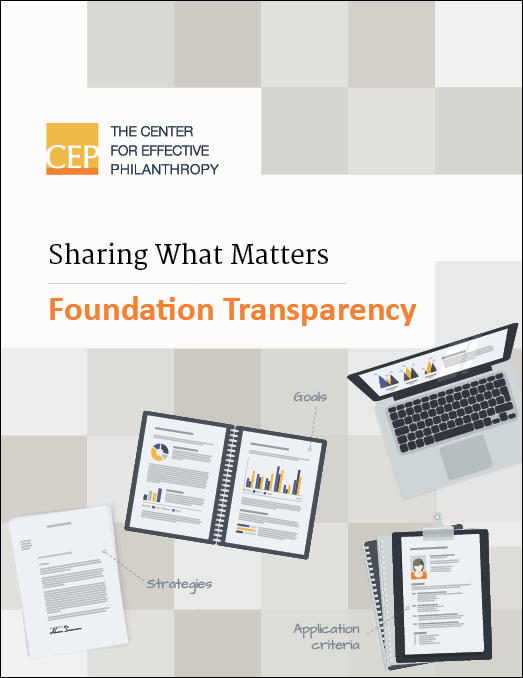 The study’s review of foundation websites reinforced these findings. Only 4% of those
reviewed shared “comprehensive assessments” of the foundation’s performance, and only 5% shared knowledge gained from “projects that have not succeeded.”

Yet a majority of foundation CEOs identified enhanced transparency in these areas as measures that could improve their foundation’s effectiveness. Approximately 75% of responding CEOs reported that their “current levels of transparency are not sufficient,” and they cited a host of limiting factors, including concerns about publicizing outcomes that could negatively impact grantee organizations.

Approximately 70% of foundation CEOs reported that “their foundations are more transparent than they were five years ago.” They pointed to increased or improved communications and, to a lesser extent, enhanced assessment and evaluation for learning and knowledge-sharing as keys to fostering transparency.

In concluding, the study’s authors described the current lack of knowledge-sharing among foundations and grantees as a missed opportunity: “The foundations we studied are being transparent about their grantmaking practices. But they are falling short in sharing information about assessment and lessons learned. As a result, grantees and foundations are missing opportunities to learn and improve.”

How do the report’s findings compare to your experience in working with foundations and/or non-profit grantees? Is openly sharing data and information about “failed” projects a viable practice in the social good sector, or should concerns about organizational reputation take precedence? How can foundations and nonprofits balance the need for collaborative, data-driven evaluation and learning with concerns about privacy and their perceived organizational effectiveness?

The mission of the CEP is to provide data and create insight so philanthropic funders can better define, assess, and improve their effectiveness – and, as a result, their intended impact.

To stay up to date with the latest Markets For Good articles and news, sign up for our newsletter here. Make sure that you are also following us on Twitter.